Currently I am a spread offense guy, but in 2014 I had the opportunity to go coach in a Flexbone system and learn from one of the best. I spent a year in Utah coaching at Timpanogos High School under Joe DuPaix. Coach DuPaix is a man that I have great respect for. He has served as the head coach at Southern Virginia University, running backs coach at BYU, at Navy under Coach Niumatalolo, and as the offensive coordinator at Cal Poly. Coach DuPaix is currently in his second stint at Navy. Coach Niumatalolo is a part of Paul Johnson’s coaching tree, so I was blessed to learn the variation of Flexbone that they’re running at Navy and at Georgia Tech.

As such, I wanted to take a break from writing about spread offenses and talk about one of my favorite plays in all of football: the Inside Veer. What first got me interested in this play and in this type of offense is how seemingly simple it is. If you look a little bit closer though, its beauty is in its complexity. The Flexbone and the Inside Veer appear simple, but have a lot of working parts. There are a lot of adjustments that a defense can make to take away the Inside Veer, and there are several tags that can be run to adjust to what the defense is doing.

I will start by talking about Inside Veer in its base form. We begin by teaching our players the count system. 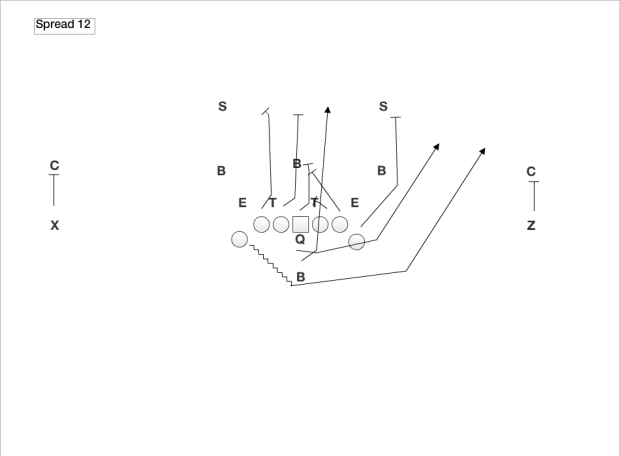 We teach our offensive line, quarterbacks, and A backs that we are going to read the first guy on the LOS outside of a 3-technique. In the diagram above if we were running Inside Veer to the right, #1 (our dive read) would be the defensive end, and #2 would be the outside backer (our pitch key). Identifying #1 and #2 are fairly simple. #3 can be a bit tricky, especially when your kids are first learning the offense. #3 is the next defender that is playing the run (the safety or the corner depending on who is playing force). #3 is the playside A back’s responsibility. #4 is the next defender, either the safety or the corner. #4 is whoever is not the force defender. #4 is the playside WR’s responsibility.

Once we go about establishing our count, we teach our players their responsibility.

BSA: Orbit Motion to get into pitch position

A couple of notes:

Playside A and Playside WR can switch block if the corner is #3 and the safety is #4.

Making sure that your offensive line is great with their scoop technique is the difference between 2-3 yards and 10+ on this play.

Now, there are several things that you will see defensively to be prepared for. When you run a “less conventional” offense, there will be times that you will see what I call the “garbage defense of the week.” What this means is that you will see nothing that comes close to resembling what you saw on film. The good news is that if a team doesn’t usually run something, then they probably aren’t good at it.

The most common tag that we used with our Inside Veer play was our “Load” tag.

When running Load, our line rules stay the same. Everybody’s rules stay the same with the exception of the playside A back. He is now going to be working with our veer releasing tackle. They are essentially responsible for that inside backer and the single safety over the top. Our PST will veer release like normal. If the linebacker stays home the tackle will take him while our A back will track the safety. If the inside backer scrapes over the top to play the pitch he will scrape right into the path of the A Back. The A Back will take him leaving the PST to work up to the next level.

The next tag that I like is the “seal” tag.

The Seal tag is a nice change up to your regular Inside Veer play. At some point a good defensive coordinator is going to figure out your rules. If you think this has happened you can play games with your blocking rules. In the seal tag your PSA will block #2 and we will now pitch off of #3.

Another tag that can be added to your inside veer is the “Cowboy” tag.

The Cowboy tag is a great way to get the ball into the hands of your QB or your speedy A back. The Cowboy turns Inside Veer into a double option as the B back is now going to kick out #1 instead of running his dive path. This tag is useful if you want the ball in your QB’s hands but #1 is never giving you a keep read. If a defensive coordinator decides that your QB is a big running threat and wants to force the dive all game long, this is a great way to counter that.

While there are more tags that you can run with your Inside Veer play, these were a few of the most common tags that we ran. If you’re a Flexbone guy and have other tags that you like, please feel free to chime-in in my comments section.